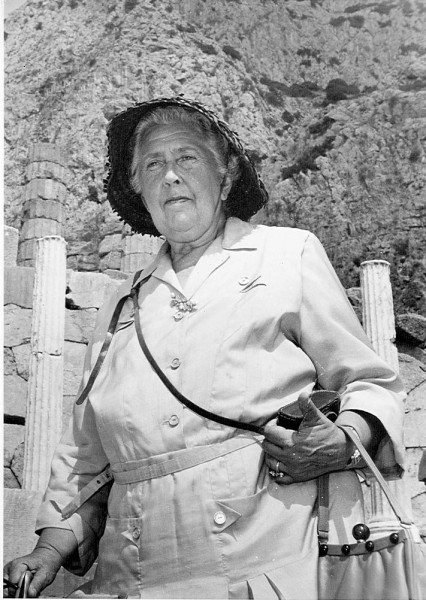 Agatha Christie, «the Crime Queen», was an intrepid traveller. The locations on most of her crime novels were inspired by places that she had visited. She travelled all over the world especially in the Middle East. Agatha Christie went to Greece for the first time in 1930 with, her then fiance, Max Mallowan. They stayed in Athens at the famous «Grande Bretagne» hotel and they planned to visit Delphi and Olympia. A telegram from home informing her that her daughter Rosalind was seriously ill with pneumonia postponed her plans and she left for England.

A few months later, as husband and wife, they visited Greece again for their honeymoon. The couple arrived in Patras from Dubrovnik by boat. They made their way by train to Olympia, site of the original Olympic Games. Christie’s verdict? «Olympia was as lovely as I thought it would be.»

Next visit was the city of Andritsaina, though, a rigorous outing tested even Christie’s fortitude and «very nearly tore the fabric of our married life» she reported. An estimated eight-hour mule ride to the hilltop town of Andritsaina turned into fourteen. After two days spent recovering, Christie «admitted that I was not sorry to have married at all, and that perhaps he could learn the proper way to treat a wife—by not taking her on mule rides until he had carefully calculated the distance.»

For Christie, the highlight in Greece was Delphi, where ruins cascade down the side of a mountain. «It struck me as so unbelievably beautiful» she recalled. «We toured the area trying to choose a place where one day we could build our house». Three decades later Agatha visited again Greece and Delphi. She found the «Navel of the Earth» with plenty of visitors but always idyllic!

When the tour was finished and they arrived in Athens, Agatha felt ill and had a high temperature. The hotel called a Greek doctor who helped her recover. His name is not mentioned anywhere but Agatha did not forget him and when in 1934 her book «Crime on the Orient Express» came out, one of the characters was a Greek doctor named Constantinou.

Agatha Christie did not forget Delphi. She wrote a crime novel entitled “The Oracle at Delphi“! and visited Greece and Delphi again almost three decades later. The picture of her in the archaeological site of the Sanctuary of Apollo in Delphi is from her visit back in 1958.

Born in Torquay in 1890, Agatha Christie became, and remains, the best-selling novelist of all time. She is best known for her 66 detective novels and 14 short story collections, as well as the world’s longest-running play – The Mousetrap. Her books have sold over a billion copies in the English language and a billion in translation.

Agatha Mary Clarissa Miller was born on 15 September 1890 in Torquay, Devon, South West England into a comfortably well off middle class family. What made her upbringing unusual, even for its time, was that she was home schooled largely by her father, an American.

Her father was often ill, suffering from a series of heart attacks, and he died in November 1901. Agatha later claimed that her father’s death, occurring when she was eleven years old, marked the end of her childhood.

By the age of 18 she was amusing herself with writing short stories – some of which were published in much revised form in the 1930s – with family friend and author Eden Philpotts offering shrewd and constructive advice. “The artist is only the glass through which we see nature, and the clearer and more absolutely pure that glass, so much the more perfect picture we can see through it. Never intrude yourself.”

Marriage and her debut novel

Ιn 1912 Agatha met Archie Christie, a qualified aviator who had applied to join the Royal Flying Corps. Their courtship was a whirlwind affair; both were desperate to marry but with no money. They married on Christmas Eve 1914 after both had experienced war – Archie in France and Agatha in a Red Cross Hospital in Torquay. Τhey met infrequently during the War Years and it wasn’t until January 1918 when Archie was posted to the War Office in London that Agatha felt her married life truly began.

Her debut novel The Mysterious Affair at Styles took some time to finish and even longer to find a publisher. 1919 was a momentous year for Agatha. With the end of the war, Archie had found a job in the City and they had just enough money to rent and furnish a flat in London. Later that year, on the 5th August, Agatha gave birth to their only daughter, Rosalind.

It was also the year that a publisher, John Lane of The Bodley Head, and the fourth to have received the manuscript, accepted The Mysterious Affair at Styles for publication and contracted Agatha to produce five more books.

So where did the inspiration for Hercule Poirot come from? During the First World War there were Belgian refugees in most parts of the English countryside, Torquay being no exception. Although he was not based on any particular person, Agatha thought that a Belgian refugee, a former great Belgian policeman, would make an excellent detective for The Mysterious Affair at Styles. Hercule Poirot was born.

In 1922, leaving Rosalind with her nurse and her mother, she and Archie travelled across the then British Empire, promoting The Empire Exhibition of 1924. She continued to write and received the joyous news of good reviews for The Secret Adversary while in Cape Town. Archie’s boss proved the inspiration for Sir Eustace Pedlar in The Man in the Brown Suit, also set in Africa. By this time Christie had already decided to change publishers. She sought out an agent and he found her a new publisher – William Collins and Sons.

Once returned from the Grand Tour it was a difficult time for Agatha – her mother had died and she was struggling to write the next novel for Collins. Archie and Agatha’s relationship broke down when Archie fell in love with a friend of the family, Nancy Neale.

On 3 December 1926, the Christies quarrelled, and Archie left their house to spend the weekend with his mistress. At around 9:45 pm, Christie disappeared from her home, leaving behind a letter for her secretary saying that she was going to Yorkshire. Her car was found at Newlands Corner, perched above a chalk quarry, with an expired driving licence and clothes.

The disappearance caused a public outcry. The home secretary, William Joynson-Hicks, pressured police, and a newspaper offered a £100 reward. Over a thousand police officers, 15,000 volunteers, and several airplanes scoured the rural landscape. Sir Arthur Conan Doyle gave a spirit medium one of Christie’s gloves to find her! Crime novelist Dorothy L. Sayers visited the house in Surrey, and used the scenario in her book Unnatural Death.

Christie’s disappearance was featured on the front page of The New York Times. Despite the extensive manhunt, she was not found for 10 days. On 14 December 1926, she was found at the Swan Hydropathic Hotel in Harrogate, Yorkshire, registered as Mrs Teresa Neele (the surname of her husband’s lover) from Cape Town. She did not recognize Archie when he came to meet her. Possibly concussed but certainly suffering from amnesia, Agatha had no recollection of who she was.

Agatha and Archie remained apart; Agatha living with Rosalind in London and following a course of psychiatric treatment in Harley Street. Needing an income and unable to write new material, her brother-in-law Campbell Christie suggested she combine Poirot short stories composed for The Sketch magazine thus creating The Big Four.

Accepting that her marriage was over, divorce from Archie was granted in 1928. Agatha and Rosalind immediately escaped England to the Canary Islands where Agatha painfully finished The Mystery of The Blue Train, the book she had struggled with as she mourned her mother. Late in 1928 Agatha wrote her first Mary Westmacott novel, Giant’s Bread, not a detective novel but a work of fiction about a composer forced to work for financial reasons.

In the autumn of 1928. Persuaded by a chance dinner party conversation, Agatha set off for Baghdad and from there travelled to the archaeological site at Ur where she became friends with the Woolleys who ran the dig. Invited back the following year she met the twenty-five year old archaeologist-in-training Max Mallowan who was to become her second husband. Their relationship was forged by travel – Max could “rough it” and so could Agatha. Max proposed on the last evening of his visit to Agatha’s family home of Ashfield, they were married on September 11th 1930.

Thus began a productive and recurring annual writing and travelling routine for Agatha and Max: summers at Ashfield with Rosalind, Christmas with her sister’s family at Abney Hall, late autumn and spring on digs and the rest of the year in London. The atmosphere of the Middle East was not lost on Agatha, as can be seen in books such as Murder on the Orient Express, Death on the Nile, Murder in Mesopotamiaa, Appointment With Death and They Came to Baghdad as well as many short stories written within this period.

World War II saw Max get a wartime job in Cairo – using his languages to assist the war effort while Agatha remained in England, writing and also volunteering at the Dispensary at University College Hospital in London. Agatha was focused and prolific during this period. Missing Max and with external entertainment more limited in wartime, she wrote and/or published such classics as And Then There Were None, Evil Under the Sun, The Body in the Library, Five Little Pigs and The Moving Finger.

At the end of 1946, Agatha’s cover as Mary Westmacott was blown by an American reviewer of Absent in the Spring. She was disappointed as she had enjoyed the freedom to write without the pressure of being Agatha Christie. The 1940s and 50s saw much time-consuming work with theatrical productions which also limited the time Agatha could devote to writing.

In the 1971 New Year Honours, she was promoted to Dame Commander of the Order of the British Empire (DBE), three years after her husband had been knighted for his archaeological work in 1968. They were one of the few married couples where both partners were honoured in their own right. From 1968, owing to her husband’s knighthood, Christie could also be styled Lady Mallowan.

From 1971 to 1974, Christie’s health began to fail, although she continued to write. Recently, using experimental tools of textual analysis, Canadian researchers have suggested that Christie may have begun to suffer from Alzheimer’s disease or other dementia. Agatha’s last public appearance was at the opening night of the 1974 film version of Murder on the Orient Express starring Albert Finney as Hercule Poirot. Her verdict: a good adaptation with the minor point that Poirot’s moustaches weren’t luxurious enough.

Agatha Christie died on 12 January 1976 at age 85 from natural causes at her home Winterbrook House. She is buried in the nearby churchyard of St Mary’s, Cholsey. 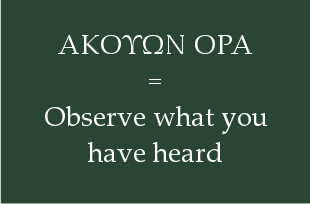 Olympic Games
A religious festival held in honour of Zeus, attended by people from all over Greece.
Delphi
[DEL-fee] (Greek: ΔΕΛΦΟΙ) A city to the west of Athens, with the famous Oracle of Delphi. People went to consult the Oracle for advice from the gods.
Athens
The capital city of modern Greece. In ancient times, Athens was a powerful city-state with its own government, laws, army and navy.