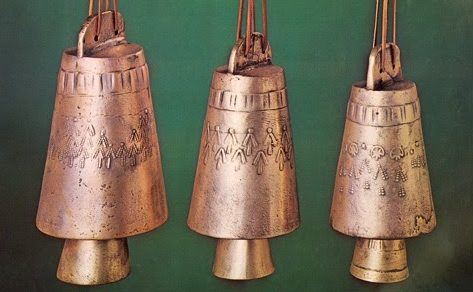 Kypria (for cows, goats and rams)

The sounds of the flocks entail melodies endured through history. The bells have been used for centuries in livestock farming for locating animals, if not the least. Shepherds up to this day, provide their flocks with ringing-sounds. That is, they hang on the neck of the animals, different types and sizes of bells. The reason is that the type of bell changes accordingly, dependent on the age and the size of the animal, along with which season of the year. Every flock is a musical orchestra! Each bell has its own tone. And all together shape a unique harmonious sound in unison for each herd.

The bell is not simply a tool, but an audio sound transmitter, thanks to which the shepherds are able to acquire a special communication code with their flocks. Experienced shepherds can understand, if and when, their flock is grazing, walking, running, if its hunted, if it is drinking water; even if it is attacked by flies, or even if there is a quarrel between the animals!

The melody of a goats flock!


They easily understand if the bell they hear is from a kid, a lamb, sheep or goat; as well as to easily identify the anomal, in case if it has left the rest of the herd!

The traditional bell craftsman’s art had flourished in the city of Amfissa and became the city’s hallmark since the 19th century. In 1930 the folklorist Dimitrios Loukopoulos in his book of compositions «The Poimenika of Roumeli», that depicts rural life in the specific region, wrote: «The mother of all bells was the Salona area, with its well known workshops. The Salonians would flood the whole area of Roumeli – the central geographical region of mainland Greece – with bells made by their craftily skilled hands». In the old days, these bell craftsmen were known as «koudounarides» or «lerades» – local folklore terminology, indicating their profession.

«The development of livestock farming within the traditional agricultural society until the last great war, brought their crafted trade at a very prominent position, as the bell was a necessary part of the herd» says Katie Kamilakis, director of the Hellenic Folklore Research Center of Academy of Athens.

A short video, dating back in 1981, about bell making in Amfissa


In general, the art of bell-manufacturing in Amfissa, had dwindled down due to certain general social developments that characterized both, this profession and livestock farming in our country overall. The hand-made «Salonian» bells have been among the top of their kind in the whole country, enjoying great popularity and acceptance throughout the whole country and have often received exceptional honors and ratings, such as at the International Trade Fair of Thessaloniki and elsewhere.

The sound of bells was used in the radio and TV stations of the Hellenic Broadcasting Corporation (ERT): from 1938 to 1997 in First Programme (radio), from 1966 το 1996 was used as the ident of ET1 (tv), from 1987 to 2013 and from 2015 till today is the ident of Voice of Greece (the international service of Greek state radio on shortwave and via satellite and the internet).

Loading... https://thedelphiguide.com/the-craft-of-bell-making-in-amfissa/https://thedelphiguide.com/wp-content/uploads/2019/01/-e1547315640218.jpghttps://thedelphiguide.com/wp-content/uploads/2019/01/-e1547315640218-150x93.jpg2019-02-22T22:45:50+03:00The EditorCulture of GreeceAmfissa,bell,bell maker,bell making,bells,koudouni,koudounia,tsokaniKypria (for cows, goats and rams) The sounds of the flocks entail melodies endured through history. The bells have been used for centuries in livestock farming for locating animals, if not the least. Shepherds up to this day, provide their flocks with ringing-sounds. That is, they hang on the neck...The EditorThe Editor[email protected]EditortheDelphiGuide.com
Amfissa, bell, bell maker, bell making, bells, koudouni, koudounia, tsokani 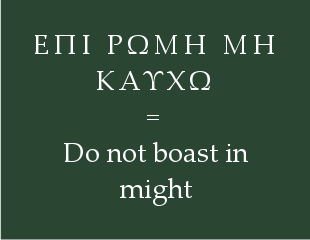 Hellenic
The term Hellenic refers to all things Greek, usually referring to ancient Greek deities, religion, culture, cosmology, tradition, etc. when used within the Pagan community. The term derives from the hellenic language family which includes only Greek, ancient and modern and in common usage, refers as much to modern Greek people, religion, culture, tradition and language as ancient.
Athens
The capital city of modern Greece. In ancient times, Athens was a powerful city-state with its own government, laws, army and navy.