The Editor Around Delphi, History, What to do No Comment 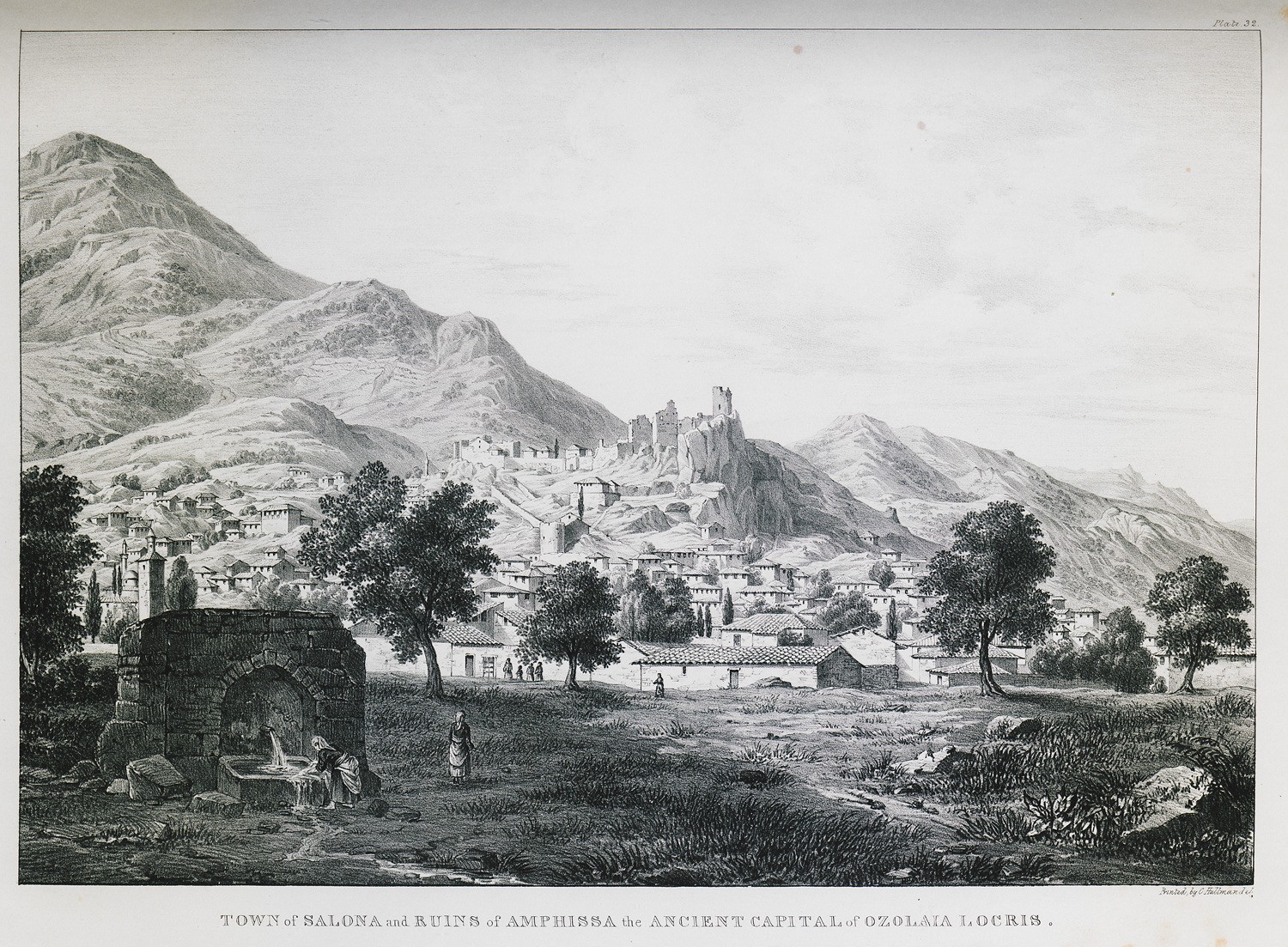 View of Amfissa with the castle. From Dodwel Edward, Views and Descriptions of Cyclopian, or, Pelasgic Remains, in Greece and Italy. London, Adolphus Richter, 1834. (pic from travelogues.gr)

At the foothills of Mount Elatos, on a rocky hill at 225m above the city the Castle of Amfissa is situated. It is also known as Castle of Salona or Castle of Oria. The castle was built at the location of the ancient acropolis of Amfissa, one of the most important city-states of Central Greece. Its early fortifications date back to the 7th c. BC. Pausanias mentions that the bronze statue of the goddess Athena, which had been brought from Troy by the King of Aetolia, Thoas , had been placed there.

The citadel has a long history from the Pelasgians to the Greek War of Independence of 1821. During that time the castle was attacked, besieged, destroyed and restored on multiple occasions. In 338 BC King Phillip II of Macedonia completely destroyed the city and the castle. The Visigoths captured the Castle of Amfissa in 396. Attila and the Huns attacked in 448. In 996 AD Samuel of Bulgaria destroyed the town and slaughtered its people. 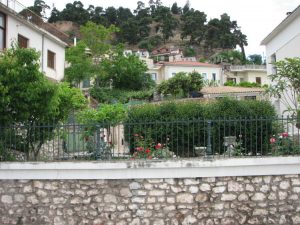 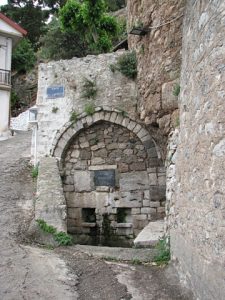 a fontaine on the road to the castle 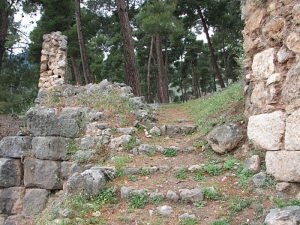 entry of castle of Amfissa 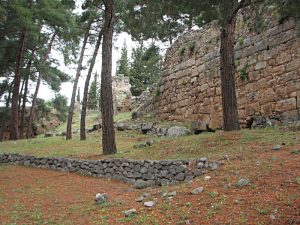 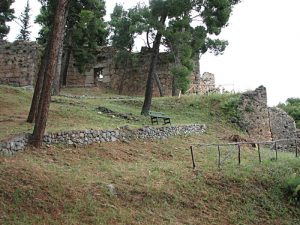 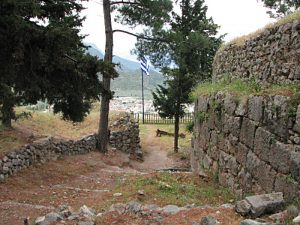 the greek flag on the castle of Amfissa 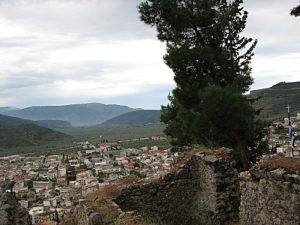 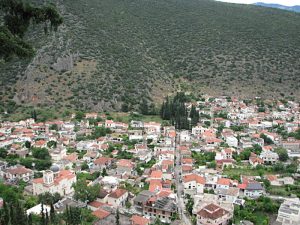 view to the North from the castle of Amfissa 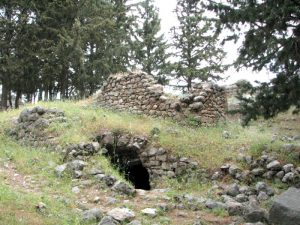 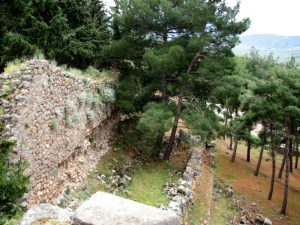 In 1205, after the Fourth Crusade and the establishment of the Latin Empire, Boniface of Montferrat, the Frank king of Thessaloniki, conquered the region of Central Greece. Amfissa became the seat of a lordship under Thomas I d’Autremencourt.

During the Greek War of Independence, Amfissa was the first town of Central Greece to revolt. On March 27, 1821, the military commander Panourgias attacked the Ottomans of Amfissa. On April 10 the Greeks captured the Castle and liberated the city. It was the first fortress that fell in the hands of the revolted Greeks, and become a symbol of freedom.

Two legends are associated with the castle of Amfissa. The first one is about princess Maria of Salona the youngest daughter and heir of the Catalan Count Louis – Frederick and his wife Countess Helena Asanina Kantakouzene. At the highest northern – eastern end of the Castle there is a cliff that local tradition named the «Jump of the princess». It holds its name from the suicide of the princess who fell off the cliff in order to avoid falling into the hands of the Turks and disgracing her.

Another legend is associated with one of the names of the castle. Back in the 14th century the Dowager Countess Helena Asanina Kantakouzene, the widow of the Catalan Count Louis – Frederick, was erotically involved with a Frank priest named Stratos. The priest had an important influence on the countess and governed the city of Amfissa on her behalf. He was a vile, violent and greedy person. According to the legend he kidnapped a beautiful young girl named Areti, the niece of the bishop of Amfissa Seraphim. He locked her away in the castle and when her uncle the bishop incited the Christians against him and requested the assistance of the Turks, he killed her. That’s why the castle of Amfissa is also called Castle of Oria (=beautiful), to commemorate the cruel death of the beautiful young Areti.

The fortification wall has a length of 650 meters and covers an area of ​​5 acres. Several buildings are saved mainly of the Frankish period. Visitors can see the boulders of the Pelasgian period, the ruins of churches of the Franks and of the Byzantines. Two round towers of the Byzantine period (the best preserved called “Tower of the Queen”) and several of the gates of the Castle of Amfissa are preserved until today. 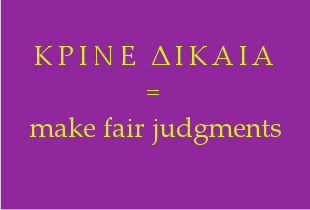 Thoas
Thoas (in Greek: Θόας), son of Andraemon and Gorge, King of Aetolians. He was one of the heroes who fought for the Greeks in the Trojan War. He led a group of forty ships, one of the larger contingents. He was one of the nine volunteers to fight Hector in one-to-one combat, but lost in the drawing of lots to Telamonian Aias.
Catalans
The Catalans (Catalan, French and Occitan: catalans; Spanish: catalanes, Italian: catalani) are an Iberian/European ethnic group of Mediterranean and Pyrenean descent, having its roots in the Pyrenees mountains.
Franks
The Franks (Latin: Franci or gens Francorum) were a collection of Germanic peoples, whose name was first mentioned in 3rd century Roman sources, associated with tribes on the Lower and Middle Rhine, on the edge of the Roman Empire.
Attila
Attila (c. 406–453), frequently called Attila the Hun, was the ruler of the Huns from 434 until his death in March 453. He was also the leader of a tribal empire consisting of Huns, Ostrogoths, and Alans among others, in Central and Eastern Europe.
Fourth Crusade
The Fourth Crusade (1202–1204) was a Latin Christian armed expedition called by Pope Innocent III. The stated intent of the expedition was to recapture the Muslim-controlled city of Jerusalem, by first conquering the powerful Egyptian Ayyubid Sultanate, the strongest Muslim state of the time. However, a sequence of economic and political events culminated in the Crusader army sacking the city of Constantinople, the capital of the Greek Christian-controlled Byzantine Empire.
Pausanias
Pausanias (in Greek: Παυσανίας, c. AD 110 – c. 180) was an Ancient Greek traveler and geographer of the second century AD. He is famous for his "Description of Greece" (Ancient Greek: Ἑλλάδος Περιήγησις, Hellados Periegesis),a lengthy work that describes ancient Greece from his first-hand observations.
Greek War of Independence
The Greek War of Independence, also known as the Greek Revolution (in Greek: Ελληνική Επανάσταση, Elliniki Epanastasi) , also referred to by Greeks in the 19th century as the Αγώνας, Agonas, "Struggle", was a successful war of independence waged by Greek revolutionaries against the Ottoman Empire between 1821 and 1830.
Pelasgians
The name Pelasgians (in Greek: Πελασγοί, Pelasgoí) was used by classical Greek writers to either refer to populations that were the ancestors or forerunners of the Greeks, or to signify all pre-classical indigenes of Greece.
Troy
Troy was a city in what is now Turkey.People from Troy called Trojans. They fought a 10-year war with the Greeks.
Macedonia
Greek state in the north of Greece, birthplace of Alexander the Great.
Delphi
[DEL-fee] (Greek: ΔΕΛΦΟΙ) A city to the west of Athens, with the famous Oracle of Delphi. People went to consult the Oracle for advice from the gods.
Athena
The patron goddess of Athens, and goddess of wisdom. A huge statue of Athena stood inside the Parthenon in Athens.
Aetolia 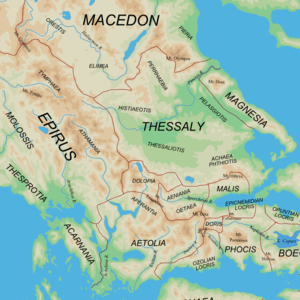 Aetolia (Greek: Αιτωλία) is a mountainous region of Greece on the north coast of the Gulf of Corinth, forming the eastern part of the modern regional unit of Aetolia-Acarnania.
Acropolis
Acropolis (in Greek: Ακρόπολις) The Acropolis is a large hill in the centre of Athens. On top of it were many temples and other buildings, the remains of which can still be seen today.