The Editor Delphi in art & pop culture No Comment
Indiana Jones and the Peril at Delphi is the first of 12 Indiana Jones novels published by Bantam Books. Rob MacGregor, the author of this book, also wrote five of the other Indiana Jones books for Bantam. 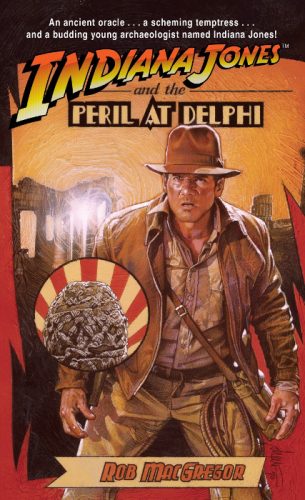 After a brief flashback to 1920, with a glimpse of Indiana Jones as a college student in Chicago, the novel moves to its main setting. The year is 1922. Indy is a graduate student in Paris, studying linguistics and Greek archaeology.

Although his greater talent currently seems to be for the former, he begins to wonder if he might be better suited for a different career after he receives a surprising invitation from his professor. Following an archaeology lecture to her class on the Greek city of Delphi, Professor Dorian Belecamus announces that she will be leaving the university for the rest of the semester in order to return to Delphi to oversee the recovery of an archaeological find, discovered recently in the wake of an earthquake in the region.

After class, to Indy’s surprise, she privately invites him to join her on the journey as her assistant, telling him that he is her best student and that she feels he could be very helpful on the expedition. After some consideration, Indy decides to accept the professor’s offer in the hopes that assisting in such an exciting undertaking may very well lead him to a more intriguing and adventurous career than world of linguistics may have to offer.

He, of course, has no idea exactly how true those ideas will prove to be as he embarks on a journey filled with mysterious figures, deceptive intentions and a lot more waiting for him Delphi than he ever expected.

INTO THE ABYSS OF THE SERPENT

For sixteen centuries the Order of Pythia has awaited the reappearance of the ancient oracle of sacred knowledge of Delphi. An earthquake, rending the earth beneath the ruins, has now heralded her return. Dorian Belecamus, a beautiful and bewitching archaeology professor, sees an opportunity to do more than dig into the past: This is her chance to seize control of her country’s future—by becoming the Oracle of Delphi! And she’s found just the man to help her consummate her scheme. He’s brash, he’s reckless, and he’s fallen under her spell. His name: Indiana Jones.

The adventure spans the globe from Chicago to Paris to Greece where, bullwhip in hand, Indy descends into the bottomless pit of the serpent god and finds a sacred stone that holds the key to the oracle’s prophecies. But Dorian has designed an even more sinister fate for young Indy: She means to make him her lover, her priest, her pawn in a plot to kill the king. Will Indy find the source of Pythia’s powers—or find himself sacrificed at Dorian’s altar, a victim of her deadly ambition and desire?

In 1981 a new hero like no other burst upon the scene. Over the next ten years and three films we grew to know and love the legend that is Indiana Jones: bold adventurer, swashbuckling explorer, he lives forever in our imaginations, unraveling the mysteries of the past in a time when the world was at war and dreams could still come true. Now, in an all-new series of novels officially licensed from Lucasfilm, we will learn what shaped Indiana Jones into the hero he is today! 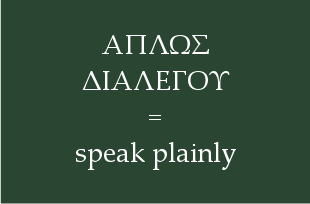 Pythia
The Pythia (in Greek: Πυθία) was the name of the high priestess of the Temple of Apollo at Delphi who also served as the oracle. The Pythia was established at the latest in the 8th century BC and is commonly known as the Oracle of Delphi.
oracle
A religious custom where people asked the Oracle questions or sought advice. The Oracle was supposed to give the answers of the gods.
Delphi
[DEL-fee] (Greek: ΔΕΛΦΟΙ) A city to the west of Athens, with the famous Oracle of Delphi. People went to consult the Oracle for advice from the gods.