How the friend of men was punished – Prometheus

Prometheus is a Titan in Greek mythology, best known as the deity in Greek mythology who was the creator of mankind and its greatest benefactor, who stole fire from Mount Olympus and gave it to mankind. It is reasonable to surmise that fire meant more to ancient people than just a useful tool. Fire also represented the divine spark of wisdom and creativity. During the history, Prometheus became a symbol of striving towards the scientific knowledge and the risk of unintended consequence which could also result in tragedy.
Enjoy his story from the pen of James Baldwin.

The story of Prometheus – How the friend of men was punished

The next thing that Jupiter did was to punish Prometheus for stealing fire from the sun. He bade two of his servants, whose names were Strength and Force, to seize the bold Titan and carry him to the topmost peak of the Caucasus Mountains. Then he sent the blacksmith Vulcan to bind him with iron chains and fetter him to the rocks so that he could not move hand or foot.

Vulcan did not like to do this, for he was a friend of Prometheus, and yet he did not dare to disobey. And so the great friend of men, who had given them fire and lifted them out of their wretchedness and shown them how to live, was chained to the mountain peak; and there he hung, with the storm-winds whistling always around him, and the pitiless hail beating in his face, and fierce eagles shrieking in his ears and tearing his body with their cruel claws. Yet he bore all his sufferings without a groan, and never would he beg for mercy or say that he was sorry for what he had done.

Year after year, and age after age, Prometheus hung there. Now and then old Helios, the driver of the sun car, would look down upon him and smile; now and then flocks of birds would bring him messages from far-off lands; once the ocean nymphs came and sang wonderful songs in his hearing; and oftentimes men looked up to him with pitying eyes, and cried out against the tyrant who had placed him there.

Then, once upon a time, a white cow passed that way,-a strangely beautiful cow, with large sad eyes and a face that seemed almost human. She stopped and looked up at the cold gray peak and the giant body which was chained there. Prometheus saw her and spoke to her kindly:

“I know who you are,” he said. “You are Io who was once a fair and happy maiden in distant Argos; and now, because of the tyrant Jupiter and his jealous queen, you are doomed to wander from land to land in that unhuman form. But do not lose hope. Go on to the southward and then to the west; and after many days you shall come to the great river Nile. There you shall again become a maiden, but fairer and more beautiful than before; and you shall become the wife of the king of that land, and shall give birth to a son, from whom shall spring the hero who will break my chains and set me free. As for me, I bide in patience the day which not even Jupiter can hasten or delay. Farewell!”

Poor Io would have spoken, but she could not. Her sorrowful eyes looked once more at the suffering hero on the peak, and then she turned and began her long and tiresome journey to the land of the Nile.

Ages passed, and at last a great hero whose name was Hercules came to the land of the Caucasus. In spite of Jupiter’s dread thunderbolts and fearful storms of snow and sleet, he climbed the rugged mountain peak; he slew the fierce eagles that had so long tormented the helpless prisoner on those craggy heights; and with a mighty blow, he broke the fetters of Prometheus and set the grand old hero free.

Heracles freeing the bound Prometheus. Side A of a Boeotian (?) black-figured cup made in Athens, ca. 500 BC.

“I knew that you would come,” said Prometheus. “Ten generations ago I spoke of you to Io, who was afterwards the queen of the land of the Nile.”

“And Io,” said Hercules, “was the mother of the race from which I am sprung.” 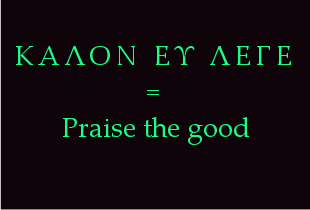 Olympus
Mount Olympus (Όλυμπος, Olympos) is the highest mountain in Greece. Located in the Olympus Range on the border between Thessaly and Macedonia, has 52 peaks, deep gorges. Olympus is notable in Greek mythology as the home of the Greek gods, on Mytikas peak. It is also noted for its exceptional biodiversity and rich flora. It has been a National Park, the first in Greece, since 1938. It is also a World Biosphere Reserve. The highest peak, Mytikas (Μύτικας Mýtikas), meaning "nose", rises to 2.917 metres (9,570 ft). It is one of the highest peaks in Europe in terms of topographic prominence.
Prometheus
In Greek mythology, Prometheus (in Greek Προμηθεύς - meaning "forethought") is a Titan, culture hero, and trickster figure who is credited with the creation of man from clay, and who defies the gods by stealing fire and giving it to humanity, an act that enabled progress and civilization.
tragedy
In theatre, a play with a sad or serious ending, and a moral lesson or teaching.
Athens
The capital city of modern Greece. In ancient times, Athens was a powerful city-state with its own government, laws, army and navy.