The Editor Culture of Greece, What to do No Comment

The famous «Harmena» is a neighborhood district within the city of Amfissa, at which all the tannery workshops were gathered for centuries, involved with the leather skin tanning process(the so called Tambakika or Tambakaria).

Harmena is located on the Westside of the city, approximately 500 meters from the historical Castle of Amfissa, while to its west and at a distance of 500 meters as well, is the important Byzantine church of Christ the Savior. (11th century A.D.)

The center of the settlement is a stone building – in actuality, it is nothing else but an open shed facing south. It is called «Toulassidi» and, unsurprisingly, it is found at the edge side of the settlement. This is the resourceful water fountain that feeds with its ample flow the workshops.

The art of leather processing (tanning) in Amfissa existed long before the 16th century, as the English traveler Dodwell, passing through Amfissa, first admired the size of the olive trees and its fruit, the olive, as well as the tanned leather skin textiles that were produced and were popularly sought after throughout the whole country of Greece and were even exported to all the then known countries abroad.

The process treatment of the leathers was done with the abundant water fountains found in the district of Harmena; there was a widespread belief that these regional waters had special properties that gave the leather skins of Harmena a characteristically indelible and shiny yellow coloration.

The local tanners of Harmena, the so called «Tambakides», would predominantly use goat skin. Their work was completely dexterous, hands-on and very time consuming; the treatment of the leather skins was a natural process and the skin-tanning was mainly done using as basic material, acorns and sumacs (a bushy wild plant that grows within the Mediterranean area). It is worth noting, that this type of natural process treatment, would give the leather skins an unique long lasting effect, as far as the engraving of golden printed letters on the leather skins.

Since it was realized that all the leather skins which would receive this type of natural process treatment, were the only ones on which engraving had a long lasting effect, they subsequently began to be widely used in bookbinding, parchments, even in bags, wallets, briefcases, interior lining of shoes etc.

The prosperous and prime heydays of the «Tambakides» of Harmena lasted until the mid-war period, and soon after World War II, the neighborhoods of the leather skin tanners slowly were declining, due to the dynamic entrance of plastic materials, that started replacing and substituting the leathers in most of their areas of usage and application.

Nowadays, there are only a few workshops in Harmena that struggle to preserve their eternal art amongst the continuous fast-pace developments of modern life.

The Harmena district neighborhood area, however, still has this unique charm that is appealing to both, locals and visitors. Its lonely, quiet and breathtaking alleys, the abandoned old workshops, the fountain along with the old plane deciduous trees, the picturesque Toulasidi (the main building of the settlement, old communal area of ​​the «Tampakides», today’s cultural area of ​​Amfissa) compose a neighborhood that is unique in value, from a historical and cultural perspective and view, classifying it among the well-known historical communities shaped and established in Greece.

Since 1989, forty-two buildings of Harmena (the old tannery buildings – called «tambakika») have been labeled as preserved. Four of these now belong to the Municipality. 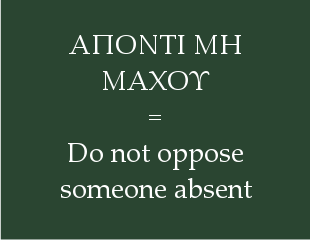