The area of Delphi – Galaxidi

The Editor Around Delphi 2 Comments

Galaxidi is situated in the gulf of Crissaea, in the region of Phocis. It is a truly magical destination, suitable for all seasons.

The town of Galaxidi has two ports, Agora and Chirolaka and is famed for its maritime tradition, one of the most prominent in modern Greece.

Sailboats from Galaxidi were renowned throughout the Mediterranean.

For travellers today, its two museums (Maritime and Folklore) and many churches and monasteries are of particular interest.

The Maritime Museum tells the history of the area. Among the museum’s exhibits are archaeological findings and nautical objects, lithographs and watercolours depicting sailboats, designs for ships, ship figureheads, sailing logs, nautical maps and diplomas of captains, pulleys and other objects of interest to seafarers.

The church of Agios Nikolaos is visible from all sides of town, standing prominently at the top of a hill, with its two belltowers.

The church is three-aisled. The left aisle is dedicated to Agios Panteleimonas and the right to Agios Spiridonas. Its templon is made of carved solid oak, and its reliefs depict scenes from the Bible.

The oldest temple in Galaxidi is that of Agia Paraskevi. Built in 1667, it is a three-aisled basilica, with a belltower and a loft for women. What sets this church apart from others is that carved in the stone slabs of the temple’s floor there is a «Sunflower – Zodiac Cycle», made by the shipowner and captain Elias Skourtis (1835 – 1915). The captain, known for his interest in mysticism, carved the zodiac cycle along with the twelve months of the year in 1911. It functions as a solar calendar. Every day at noon, the sun’s ray which enters the temple from a round vent in the ceiling, falls on a specific section of the «Sunflower» and tells the date. There is also a sign explaining how the «Sunflower» functions and helps make sense of and correct time lapse, depending on each season.

The sailing-ship carpenters and caulkers of Galaxidi

« Glossary
Delphi travel : Getting to Delphi » 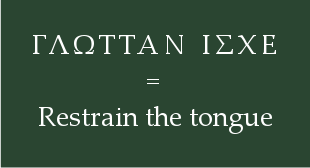 Delphi
[DEL-fee] (Greek: ΔΕΛΦΟΙ) A city to the west of Athens, with the famous Oracle of Delphi. People went to consult the Oracle for advice from the gods.
agora
The agora (Aγορά in Greek) was a central public space in ancient Greek city-states.