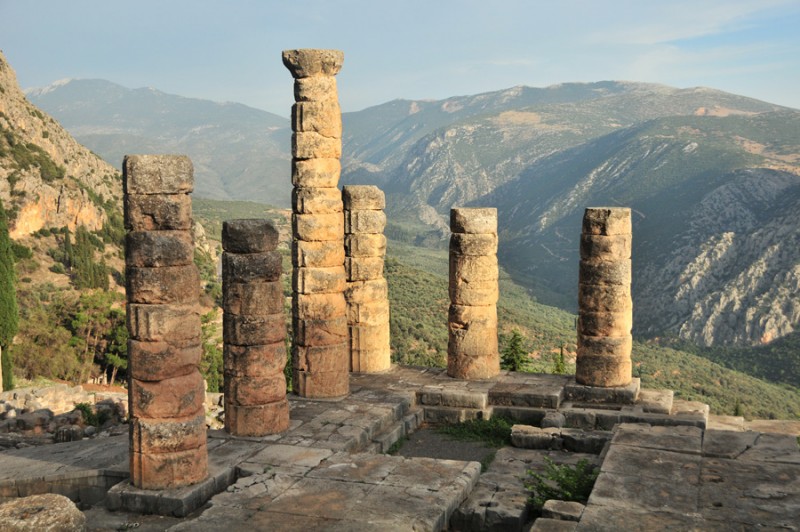 Apollo, the god of purification and divination, established the initial forms of his faith at Delphi. He taught people the importance of «measure» and became the most moral and peaceful expression of the Greek spirit and culture. At the renowned Oracle of Delphi, the Gods’ will was dictated through the Priestess Pythia. 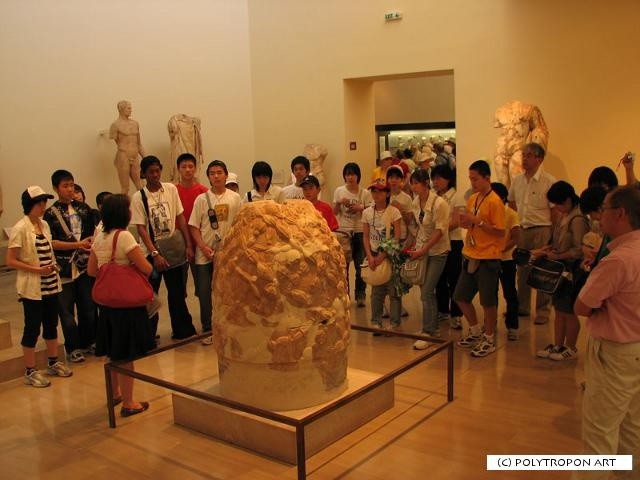 Delphi – “Omfalos” (the navel) exhibited in the Archaeological Museum of Delphi (photo from Polytropon Art). 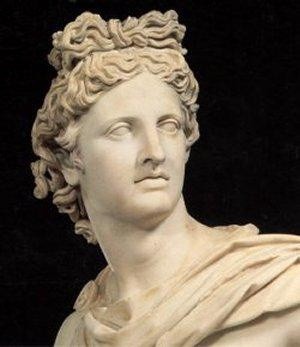 The first evidence of habitation in the area dates back to the Mycenaean era (C14th-C11th B.C.). At the time, the main deity worshiped was Earth. From the 11th to 9th century B.C., the worship of Apollo was established.

According to the myth, Apollo took up residence there after he slew the dragon-like Python, which guarded the Earth goddess’s oracle. After his sublimation, Apollo returned to Delphi and established his worship at the oracle which exists in his honor to this day.

During the 8th and 7th centuries B.C., the areas of the sacred precinct of Delphi were configured. Toward the end of the 7th century B.C., the first two stone temples were built, dedicated to Apollo and Athena. At the beginning of the 6th century B.C., Delphi joined the Amphictyony, a union of city-states with common political goals, which served to protect the temple from conquest. In time, the Delphic Amphictyony attained jurisdiction over the temple of Apollo and in 528 B.C. once again organized the Pythian Games, which took place every four years in honor of Apollo, to commemorate the god’s victory against Python. 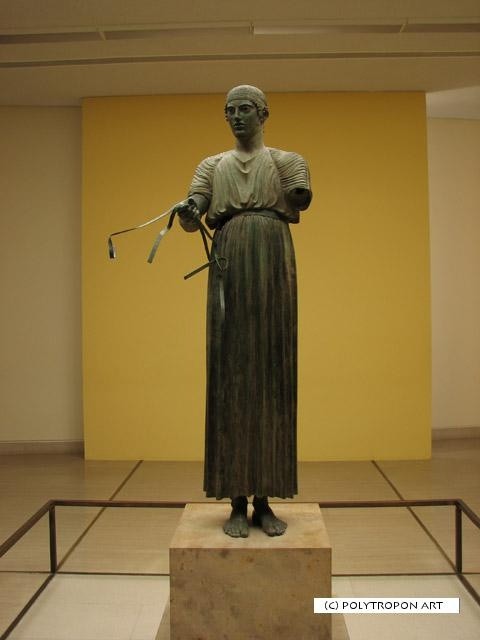 Through the Amphictyonic Council, Delphi communicated the ideals of friendship, brotherhood and peaceful coexistence of all people. These ideals have remained central to what is today referred to as the Delphic Ideal.

From the 6th to the 4th century B.C., the sanctuary at Delphi thrived. The temple was decorated with offerings and dedications to Apollo from Greek cities and individuals. Pilgrims would arrive from all over the ancient world to ask for consultation and prophecy for important issues of state and for personal matters. The pilgrims would wash themselves clean at the Kastalia Spring, pay a kind of tax (the pelanon) and sacrifice an animal at the altar of Apollo. 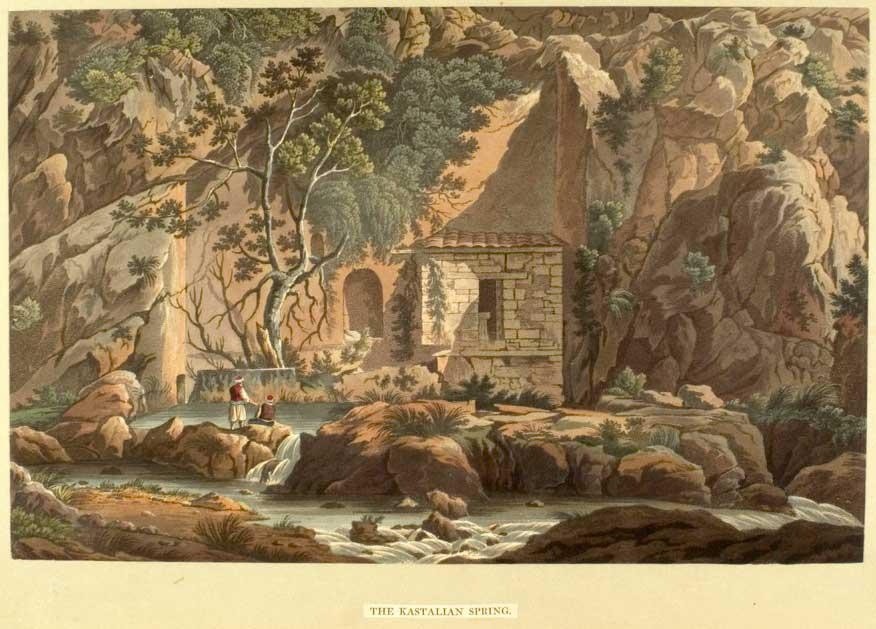 Apollo’s prophecies were expressed by Pythia and then deciphered by Apollo’s priests. The ritual’s ceremony took its final form during the 6th century B.C. and remained intact until the time of Hadrian (2nd century B.C.).

During the time of its prosperity, the Oracle at Delphi was not just a religious center. It also exerted political influence, and often played an important part in political developments in Greece. In the Hellenistic years, the political influence of the Oracle diminished. However, its grandeur and prestige remained almost intact long afterwards. 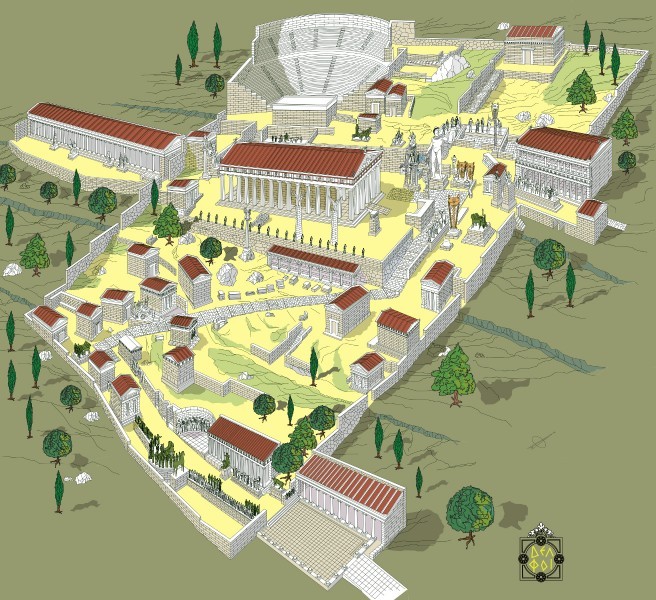 Roman emperors and officers were at times supportive of the site’s up-keeping and at other times played a part in its decline.

During its long history, the Oracle of Apollo at Delphi has witnessed natural disasters from fire and rock-slides (of the Faidriade Stones) to hostile attacks and looting of its treasures. Pausanias, one of the earliest Greek travel writers visited Delphi in the 2nd century A.D., and in his book «Fokika» left an important detailed account of all the monuments he observed in the area as well as the myths attached to them.

As Christianity prevailed and idolatry was quashed, Delphi began to decline. The sanctuary was eventually abandoned. It is said that Pythia delivered her final prophecy to the emperor Julian the Apostate (361 – 363 A.D.) who had attempted to revive the Oracle.

Tell the emperor that my hall has fallen to the ground.
Phoibos no longer has his house,
nor his mantic bay,
nor his prophetic spring;
the water has dried up.

The last recorded oracle was in 393 A.D. when by order of Emperor Theodosius I’ the temple was closed and never reopened. The Oracle declared: all is ended. Within 5 years the Emperor Theodosius I was dead and 15 years later the Visigoths captured Rome. 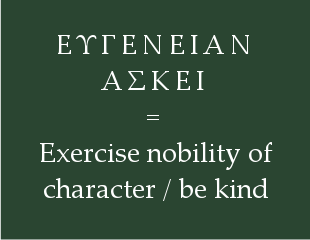 Julian the Apostate
Julian (Flavius Claudius Iulianus Augustus; Greek: Φλάβιος Κλαύδιος Ἰουλιανὸς Αὔγουστος; 331/332[1] – 26 June 363), also known as Julian the Apostate, was Roman Emperor from 361 to 363, as well as a notable philosopher and author in Greek. He supported the restoration of Hellenistic polytheism as the state religion. Hisaim was not to destroy Christianity but to drive the religion out of "the governing classes of the empire".
Pausanias
Pausanias (in Greek: Παυσανίας, c. AD 110 – c. 180) was an Ancient Greek traveler and geographer of the second century AD. He is famous for his "Description of Greece" (Ancient Greek: Ἑλλάδος Περιήγησις, Hellados Periegesis),a lengthy work that describes ancient Greece from his first-hand observations.
Pythia
The Pythia (in Greek: Πυθία) was the name of the high priestess of the Temple of Apollo at Delphi who also served as the oracle. The Pythia was established at the latest in the 8th century BC and is commonly known as the Oracle of Delphi.
Pythian games
The Pythian games were held at Delphi. In early times, a contest in singing a hymn for the god Apollo was held there every eight years. In 586 B.C. the Amphictyony took control of the sanctuary and added other musical events - in which quite early women could take part as well - and sports contests to the games. The year 586 BC is therefore considered the foundation date of the Pythian games. The Pythian games belonged to the periodos and were held every four years in the summer, always in the third year of an olympiad. Even after the introduction of sports contests the musical events remained the most important. They came first in the program:
Zeus
[zz YOOS] (Greek: Ζεύς) The king of the gods. Zeus was the most powerful of the ancient Greek gods.
sacrifice
A gift made to the gods. For example, pieces of meat could be burned on an altar as a sacrifice.
Roman
Roman means “of Rome” or a person from Rome. The Ancient Romans conquered Greece around 146 BC, but admired and copied Greek civilization.
Python
(Greek: Πύθων) was the serpent, sometimes represented as a dragon, living at the centre of the earth, at Delphi.
oracle
A religious custom where people asked the Oracle questions or sought advice. The Oracle was supposed to give the answers of the gods.
Delphi
[DEL-fee] (Greek: ΔΕΛΦΟΙ) A city to the west of Athens, with the famous Oracle of Delphi. People went to consult the Oracle for advice from the gods.
Athena
The patron goddess of Athens, and goddess of wisdom. A huge statue of Athena stood inside the Parthenon in Athens.
amphictyony
a "league of neighbors", or Amphictyonic League was an ancient religious association of Greek tribes formed in the dim past, before the rise of the Greek polis.