The Editor Around Delphi, Museums & Archaeological sites, What to do 2 Comments

The Archaeological Museum of Amfissa exhibits finds from Amfissa and other sites of Phokida, dating from the Bronze Age to the Early Byzantine period.

The museum is housed in a typical two-storey urban dwelling of the early twentieth century, one of the very few of its kind preserved in the city. The building, which had previously been used by the National Bank of Greece and by the local police, was handed over by the City of Amfissa to the Ministry of Culture in 1987.

The museum opened on May 18, 2002 and has several exhibition rooms on two floors and a multi-purpose exhibition / lecture hall.

The permanent collection of the Archaeological Museum of Amfissa contains finds from the city of Amfissa and other sites of Phokida, which in ancient times belonged to the territory of Western Lokrida. These finds date from the Early Bronze Age to Late Antiquity (2800 BC-sixth century BC).

The first floor exhibition is divided into thematic units illustrating different aspects of the history of Amfissa and its region. Also on this floor is an interesting exhibition on the history of coinage. Explanatory texts and maps complete the display.

A very nice collection of inscriptions is exposed in the courtyard of the museum.

The impressive collection of terracotta heads with different hairstyles (findings from Amfissa, exhibed in room I) and the statue of Persephone of Kallio (room II), are some of the collection highlights.

On the first floor, in a specially designed area, is housed the monetary collection of the Museum. Included are pre–coin money from the pre-Hellenic times, coins from Ancient Greek, Roman and Byzantine periods, Venetian coins and coins from the Frank ocupation periode and coins from the early start of Modern Greece up to the Euro.

The monetary collection relies mainly on the donation to the Museum from the private collection of Drossos Kravartogiannos.

Also on this floor are exhibed a collection of children toys : small terracota animals and birds, a «plagon» (jointed terracota dolls were called plagon / nevrospaston) and a small lycythos depicting a crawling baby. 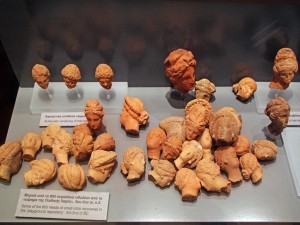 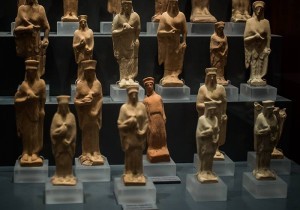 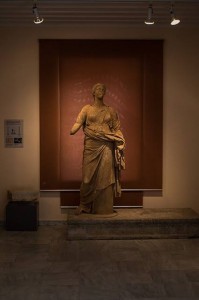 the statue of Persephone of Kallio

In the same place where the museum is located, during the Greek War of Independence, a council was held (November 1821) where the main local notables and military chiefs participated. They decreed a proto-constitution for the region, the “Legal Order of Eastern Continental Greece” (Νομική Διάταξις της Ανατολικής Χέρσου Ελλάδος), and established a governing council, the Areopagus, composed of 71 notables from Eastern Continental Greece as well as the regions of Thessaly and Macedonia. 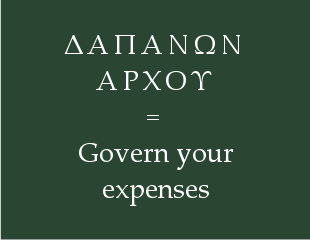 Thessaly
Thessaly (Θεσσαλία, Thessalia) was one of the traditional regions of Ancient Greece. During the Mycenaean period, Thessaly was known as Aeolia, a name that continued to be used for one of the major tribes of Greece, the Aeolians, and their dialect of Greek, Aeolic.
Persephone
In Greek mythology, Persephone (in Greek: Περσεφόνη, persefoni), also called Kore (Κόρη, kori, "the maiden"), is the daughter of Zeus and Demeter and is the queen of the underworld. Homer describes her as the formidable, venerable majestic princess of the underworld, who carries into effect the curses of men upon the souls of the dead.
Roman
Roman means “of Rome” or a person from Rome. The Ancient Romans conquered Greece around 146 BC, but admired and copied Greek civilization.
Macedonia
Greek state in the north of Greece, birthplace of Alexander the Great.
Hellenic
The term Hellenic refers to all things Greek, usually referring to ancient Greek deities, religion, culture, cosmology, tradition, etc. when used within the Pagan community. The term derives from the hellenic language family which includes only Greek, ancient and modern and in common usage, refers as much to modern Greek people, religion, culture, tradition and language as ancient.
Delphi
[DEL-fee] (Greek: ΔΕΛΦΟΙ) A city to the west of Athens, with the famous Oracle of Delphi. People went to consult the Oracle for advice from the gods.