Aphrodite: the goddess of Love and Beauty 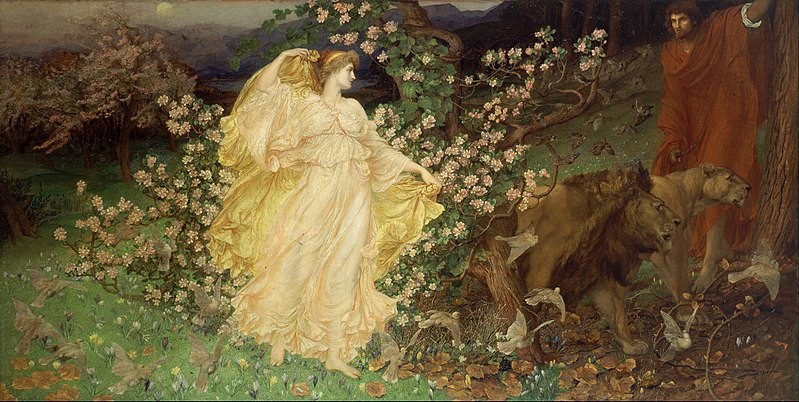 Aphrodite (from aphros, sea-foam, and dite, issued), the daughter of Zeus and a sea-nymph called Dione, was the goddess of Love and Beauty.

Dione, being a sea-nymph, gave birth to her daughter beneath the waves; but the child of the heaven-inhabiting Zeus was forced to ascend from the ocean-depths and mount to the snow-capped summits of Olympus, in order to breathe that ethereal and most refined atmosphere which pertains to the celestial gods. 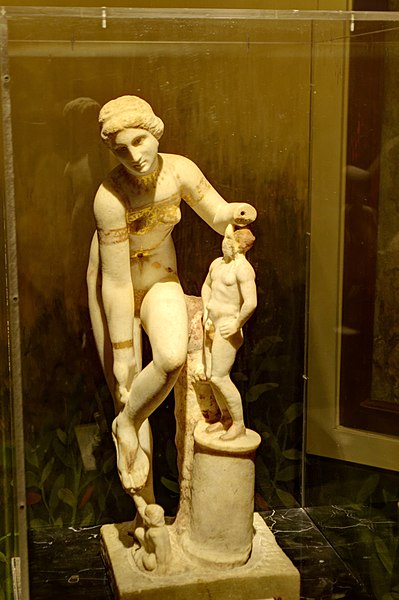 The so-called “Venus in a Bikini”, this polychrome Roman marble statue from Pompeii (79 AD) actually depicts her Greek counterpart Aphrodite ready to untie her sandal in front of a small Eros. Naples, National Archaeological Museum, Italy.

Aphrodite was the mother of Eros (Cupid), the god of Love, also of Aeneas, the great Trojan hero and the head of that Greek colony which settled in Italy, and from which arose the city of Rome. As a mother Aphrodite claims our sympathy for the tenderness she exhibits towards her children. Homer tells us in his Iliad, how, when Æneas was wounded in battle, she came to his assistance, regardless of personal danger, and was herself severely wounded in attempting to save his life. 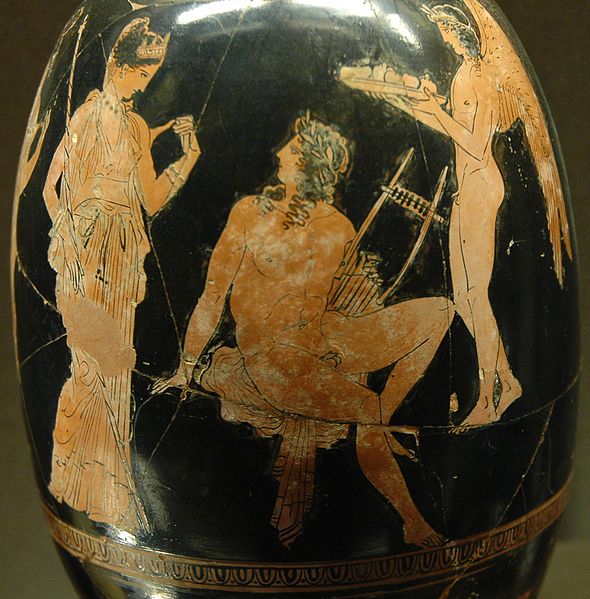 Aphrodite was tenderly attached to a lovely youth, called Adonis, whose exquisite beauty has become proverbial. He was a motherless babe, and Aphrodite, taking pity on him, placed him in a chest and intrusted him to the care of Persephone, who became so fond of the beautiful youth that she refused to part with him. Zeus, being appealed to by the rival foster-mothers, decided that Adonis should spend four months of every year with Persephone, four with Aphrodite, whilst during the remaining four months he should be left to his own devices. He became, however, so attached to Aphrodite that he voluntarily devoted to her the time at his own disposal.

Adonis was killed, during the chase, by a wild boar, to the great grief of Aphrodite, who bemoaned his loss so persistently that Hades, moved with pity, permitted him to pass six months of every year with her, whilst the remaining half of the year was spent by him in the lower world.

Aphrodite possessed a magic girdle (the famous cestus) which she frequently lent to unhappy maidens suffering from the pangs of unrequited love, as it was endowed with the power of inspiring affection for the wearer, whom it invested with every attribute of grace, beauty, and fascination.

Her usual attendants are the Charites or Graces (Euphrosyne, Aglaia, and Thalia), who are represented undraped and intertwined in a loving embrace. 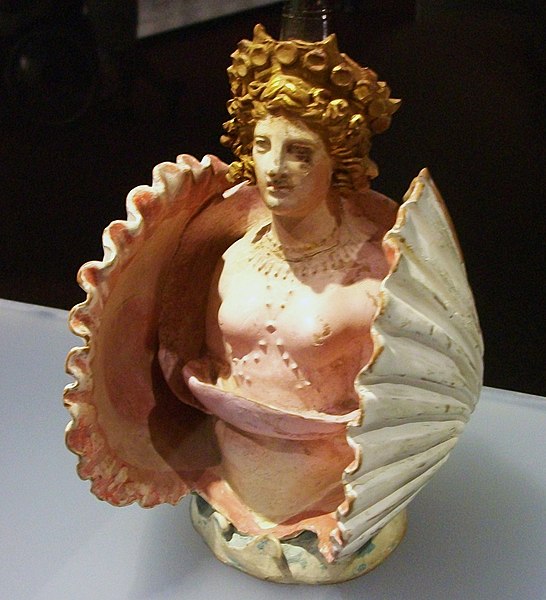 Early fourth-century BC Attic pottery vessel in the shape of Aphrodite inside a shell from the Phanagoria cemetery in the Taman Peninsula. Hermitage Museum, Saint Petersburg, Russia.

In Hesiod’s Theogony she is supposed to belong to the more ancient divinities, and, whilst those of later date are represented as having descended one from another, and all more or less from Zeus, Aphrodite has a variously-accounted-for, yet independent origin.

Aphrodite of the Syracuse type. Parian marble, Roman copy of the 2nd century CE after a Greek original of the 4th century BC; neck, head and left arm are restorations by Antonio Canova. Found at Baiae, Southern Italy. National Archaeological Museum of Athens, Athens, Greece.

The most poetical version of her birth is that when Uranus was wounded by his son Cronus, his blood mingled with the foam of the sea, whereupon the bubbling waters at once assumed a rosy tint, and from their depths arose, in all the surpassing glory of her loveliness, Aphrodite, goddess of love and beauty!

Shaking her long, fair tresses, the water-drops rolled down into the beautiful sea-shell in which she stood, and became transformed into pure glistening pearls. Wafted by the soft and balmy breezes, she floated on to Cythera, and was thence transported to the island of Cyprus.

Lightly she stepped on shore, and under the gentle pressure of her delicate foot the dry and rigid sand became transformed into a verdant meadow, where every varied shade of colour and every sweet odour charmed the senses. 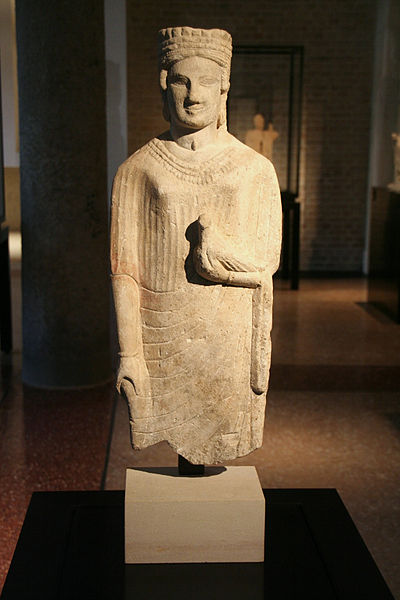 Early fifth-century BC statue of Aphrodite from Cyprus, showing her wearing a cylinder crown and holding a dove. Berlin State Museums, Berlin, Germany.

The whole island of Cyprus became clothed with verdure, and greeted this fairest of all created beings with a glad smile of friendly welcome. Here she was received by the Seasons, who decked her with garments of immortal fabric, encircling her fair brow with a wreath of purest gold, whilst from her ears depended costly rings, and a glittering chain embraced her swan-like throat. And now, arrayed in all the panoply of her irresistible charms, the nymphs escort her to the dazzling halls of Olympus, where she is received with ecstatic enthusiasm by the admiring gods and goddesses.

The gods all vied with each other in aspiring to the honour of her hand, but Hephaestus became the envied possessor of this lovely being, who, however, proved as faithless as she was beautiful, and caused her husband much unhappiness, owing to the preference she showed at various times for some of the other gods and also for mortal men.

The celebrated Venus of Milo, now in the Louvre, is an exquisite statue of this divinity. The head is beautifully formed; the rich waves of hair descend on her rather low but broad forehead and are caught up gracefully in a small knot at the back of the head; the expression of the face is most bewitching, and bespeaks the perfect joyousness of a happy nature combined with the dignity of a goddess; the drapery falls in careless folds from the waist downwards, and her whole attitude is the embodiment of all that is graceful and lovely in womanhood. She is of medium height, and the form is perfect in its symmetry and faultless proportions.

Aphrodite is also frequently represented in the act of confining her dripping locks in a knot, whilst her attendant nymphs envelop her in a gauzy veil.

The animals sacred to her were the dove, swan, swallow, and sparrow. Her favourite plants were the myrtle, apple-tree, rose, and poppy.

The worship of Aphrodite is supposed to have been introduced into Greece from Central Asia. There is no doubt that she was originally identical with the famous Astarté, the Ashtoreth of the Bible, against whose idolatrous worship and infamous rites the prophets of old hurled forth their sublime and powerful anathemas. 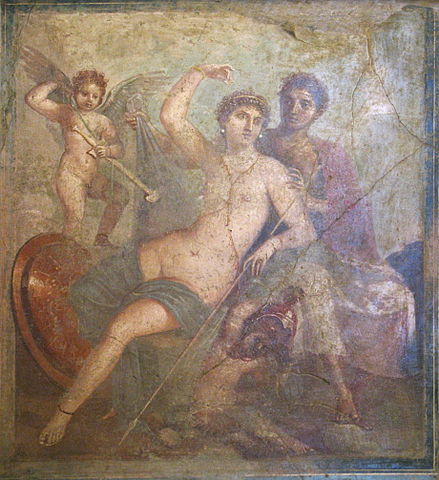 First-century AD Roman fresco of Aphrodite and Ares, from Pompeii.

The Venus of the Romans was identified with the Aphrodite of the Greeks. The worship of this divinity was only established in Rome in comparatively later times. Annual festivals, called Veneralia, were held in her honour, and the month of April, when flowers and plants spring forth afresh, was sacred to her. She was worshipped as Venus Cloacina (or the Purifier), and as Venus Myrtea (or the myrtle goddess), an epithet derived from the myrtle, the emblem of Love.

This post is an execrept from the book The Myths and Legends of Ancient Greece and Rome, by E. M. Berens

Of all the Ancient Greek facts, the stories of the Greek gods are the most fascinating! The ancient Greeks worshipped many gods, each with a distinct personality and domain. Greek myths explained the origins of the gods and their individual relations with mankind. Acquiring a working knowledge of mythology can enrich a man’s life and open cultural doors that would otherwise remain locked. Keep in mind that when considering Greek myths we must remember that the Greeks were creating stories based on their own fallible human nature. Greeks were not attempting to create a system of absolute truth; they were simply telling stories to explain the world around them.

Athena: the virgin goddess of Wisdom and Warfare